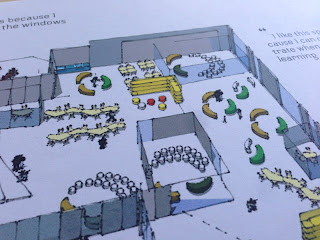 Currently within each learning hub we have one larger space that can be closed down - it’s equivalent in size to a traditional classroom (about 64 square metres) – as well a couple of smaller (11 sq m) breakout spaces. They both have glass sliding doors and good acoustic separation.

The ability to close the doors for a while is important for some children. One of our youngest students, referring to a small glazed breakout space, reported that “I like to go to the small room because it is quiet. Another suggested that, “I like this space because it can shut its doors and it will be quiet”.

However a couple of our older students made an interesting observation:
Student 1 - I like the quiet room because it’s easier to work in there because there’s no noise
CB – Which one’s the quiet room for you?
Student 1 - The one with the books in it - the library. The Google room’s cool too because it’s a big area and you can close it off.
Student 2 – But it’s annoying when there are millions of people in there
CB – Do you think it’s important that you have spaces that you can close off?
Student 1 – Yes because if you’re going to be noisy, if you were doing a film or something, you can close it off so that people don’t get distracted by our learning. And it’s also good if you want to have quiet and so you can block off all the noise.

So these two students considered a space that they referred to as a quiet room to hold dual purposes. Firstly that it was a place to find quiet, and secondly a place that you could close down in order that it was quiet for everyone else.

The Professional Learning Group has recently toured a couple of business environments in order to draw some comparisons with the types of spaces we are designing for schools. Both the bank and the architects that we’ve visited have an emphasis on open, collaborative and highly interactive spaces. There are hot desk stations, settings for teams, presentation spaces as well as food based spaces; the coffee bar, the shared kitchen, and outdoor seating.

These are the sort of spaces that Jonah Lehrer refers to in Imagine: How creativity works, when he talks about the Pixar Animation Studios. They are the places of the incidental encounters, casual conversations, the places for connections to be made, networks to be broadened. They are Ray Oldenburg’s ‘third places’ - spaces that bring together diverse talents and view points. Not that all the conversations that are going to go on there will be of high significance, just that some of the are. What characterises these spaces is the openness, accessibility and proximity for all.

But although there was an emphasis on collaboration and openness in the places we visited, both environments still had a need for closing down spaces at times – to hold client meetings, for team meetings, presentations, phone calls, interviews and confidential conversations - and so had rooms set aside for just that purpose.

It’s a point that Fayard and Weeks (2011) make in discussing the transition from private office work environments to open, shared spaces. They discuss that even though there are positive behavioural effects of the redesigns there is also counter evidence to suggest that opening up the space may actually inhibit casual conversations and encounters. “Though it may seem counterintuitive, research shows that informal interactions won’t flourish if people can’t avoid interacting when they wish to” (p. 105). Herman Miller Inc’s recent paper on collaboration makes a similar point. “Smaller rooms and alcoves a little off the beaten path can provide a person with the peace and quiet needed to synthesise a large amount of information and write a report” (p. 5)

Shift that thinking into a school context and what does it suggest? Well it’s about students having access to some spaces that can be closed down, while at the same time having the affordance of visibility. I like the notion of having a ‘room within a room’ that Stephen Heppell refers to - and I like the way he frames it - “agile little spaces-within-spaces that have proved so popular with children and teachers alike - they offer a space for mutuality, for an intimacy of collaboration, for serious study and focused conversations, for peace & quiet sometimes, for focus and of course, with always one side open and an eye line in, for safety too.”

And I think that our children have discovered this for themselves. When you walk into a learning hub and observe they have rearranged furniture, or sit behind a teaching station, or a couch, or nestle into a corner or up against a window, or on a stage block, more often than not they have created their own spaces that purpose their own learning. When asked to design potential new environments, the idea of creating nooks and crannies was a common theme among children. Take this model for example. 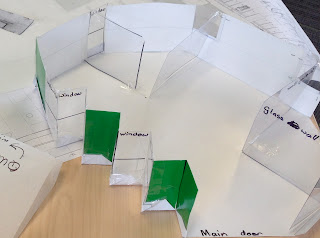 When asked about the zig-zag wall, the two children who’d built it talked about the little spaces that it created – small environments our architect might describe as ‘worlds’. Corners it seems to our children are important places for learning.

Another couple designed this sunken amphitheatre with group dialogue and discussion in mind: 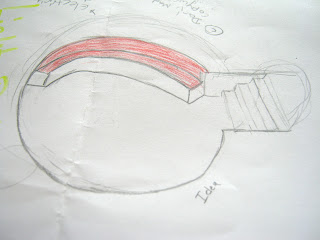 On a recent trip to Melbourne University I came across this ‘room within a room’. It’s open, visible and whilst not acoustically separated from the larger environment it is part of, there was a sense of purposeful separation. The lines delineated by the carpet too added to the concept. 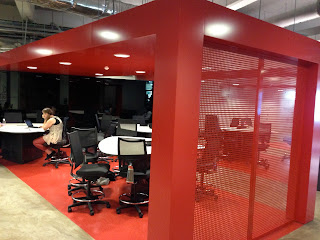 This couch area too, at the architect office, despite being right in the middle of the practice, forms it’s own little world for people to meet and discuss, and learn. Strangely enough and despite its centrality it affords  a surprising amount of noise insulation from the general murmur of work and keyboards around it. 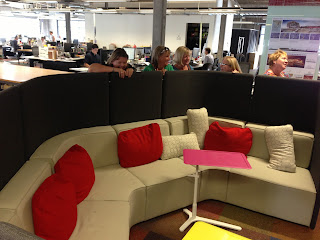 As we move into finalising our hub designs, when we think about the spaces within, it’s about exploring a balance between open spaces where shared teaching, collaboration and group work can go on, and at the same time providing a couple of smaller breakout spaces which can be acoustically separated. Teachers have commented that we probably need two closeable spaces; one for a larger group of students (although not as large as a classroom), and another one for small groups. The visible nature of spaces with large glass doors is seen as a real positive too.

Also though its important to look at creating other spaces, alcoves and worlds within the larger one; perhaps through the use of the corners, nooks and crannies, hinging screens and staircases that are so popular with our learners. Over the next few weeks the designs will continue to evolve and we'll be going to our teachers and students for some all to critical feedback.

Herman Miller Inc. (2012). What it takes to collaborate, from http://www.hermanmiller.com/content/hermanmiller/english/research/research-summaries/what-it-takes-to-collaborate.html

Chris Bradbeer
Embarking on a research masters program on the subject of pedagogy and classroom spaces, I have many ideas, hypotheses, and prospective lines of inquiry. My intention is to use this space to surface my thinking, reflect on readings, engage in dialogue and begin to ask and answer some of the tricky questions. I am an Associate Principal in a new Auckland primary school keen to maximise the use of open learning spaces and mindful of the challenges they present. I'm passionate about future school design, e-learning, remote places and Kiva. Views here are my own.

Where in the world...

Well worth a look!